Showing posts from September, 2022
Show All

MEASURE OF A MOMENT - Theatre Review 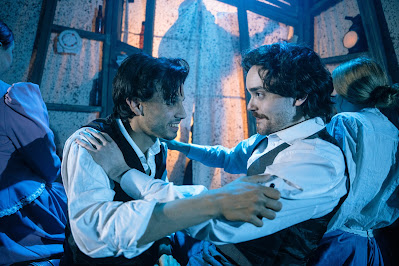 WHAT: Measure of a Moment WHEN: 28 September - 2 October 2022 WHERE: La Mama Courthouse WRITTEN BY: Charles Mercovich DIRECTED BY: Robert Johnson COMPOSED BY: Louis Ajani SET BY: Riley Tapp COSTUMES BY: Amy Oakes and Emily Busch PERFORMED BY: Jordan Chodziesner, Liliana Dalton, Claire Duncan, Asher Griffith-Jones, Carissa McPherson, Darren Mort, Abigail Pettigrew, and Luke Toniolo STAGE MANAGED BY: Jemma Law Asher Griffith-Jones and Jordan Chodziesner - photo by Cameron Grant People think making theatre is easy. People think writing plays is just another writing style. People think anyone can act. It takes plays like Measure of a Moment - now playing at La Mama Courthouse - to show us how fallacious those thoughts are. Measure of a Moment is set in the 1890s in Melbourne and follows the misfortunes of a young lad named Connor ( Jordan Chodziesner ) as he deals with career disappointment and the temptations of vice. It is a cautionary tale about the dangers of gambling and the pitfal
Post a Comment
Read more

WHAT: Whalebone WHEN: 22 - 24 September 2022 WHERE: Theatreworks CREATED AND PERFORMED BY: Jens Altheimer Jens Altheimer We all know how important stories are, and we know that history repeats when we don't keep track of our stories. In Whalebone Jens Altheimer aims to pass on the ideas of remembering and recycling to our younger, computer literate, high consumption next generation. Altheimer is a Lecoq trained clown who brings a delightful dodderiness to his collection curator character. He is also a self-proclaimed tinkerer which is witnessed by the odd and amazing collection of trinkets and apparatus peppering the stage space. The junkyard/steampunk stories repository sits in juxtaposition to the swirling, geometric AV fractals projected onto a huge screen behind him. With a premise similar to The Bureau of Magical Things , Altheimer has created a depository (or library) which retains the history embedded into the souls of everyday objects. He places objects like swimming ca
Post a Comment
Read more

WHAT: The Lighthouse WHEN: 8-10 September 2022 WHERE: Brunswick Mechanics Institute WRITTEN & COMPOSED BY: Peter Maxwell Davies DIRECTED BY: Kate Millett CONDUCTED BY: Evan Lawson DESIGNED BY: Casey Harper-Wood LIGHTING BY: Gabriel Bethune SOUND BY: Jack Burmeister PERFORMED BY: Sung Won Choi, Jonathan Rumsan, Henry Shaw, Daniel Sinfield, Phoebe Smithies Henry Shaw, Jonathan Rumsam, Daniel Sinfield, Sung Won Choi, and Evan Lawson Winter is officially over but we Melburnians know it will be months before it really warms up again. As such, this is the perfect time of year for thrillers and BK Opera has brought us the perfect feast of thrills and frights to revel in on these dark, cold nights. The Lighthouse , a chamber opera by the late Peter Maxwell Davies written in 1979, is being performed at Brunswick Mechanics Institute and will chill you to the bones despite the warmth and comfort of the theatre you are sitting in. The Lighthouse is a chamber opera based on a horror story wh
Post a Comment
Read more 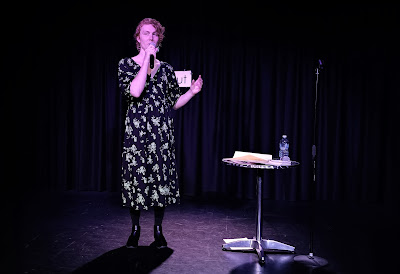 WHAT: Debut WHEN: 27 August 2022 WHERE: The MC Showroom WRITTEN AND PERFORMED BY: Daisy Webb Daisy Webb Theatre venues and performers all over Melbourne are trying to catch up on all the cancelled shows from 2020 and 2021. For some it is not about having a 'season', but rather about allowing all the work and love they put into the creative process having it's moment in the spotlight - literally. Daisy Webb's show Debut is one of those lost treasures and got it's moment in Queer Comedy Week at the MC Showroom for one night only. Webb is a transgender woman and takes us through some of the awkward and uncomfortable moments as she transitions. She also has a podcast with her partner called The Daisy Diaries which explores this journey between them. As a cis woman I always enjoy hearing transition stories because I learn a lot about my assumptions about gender, and it is usually a really interesting look at the nature versus nurture question. There might also be som
Post a Comment
Read more
More posts