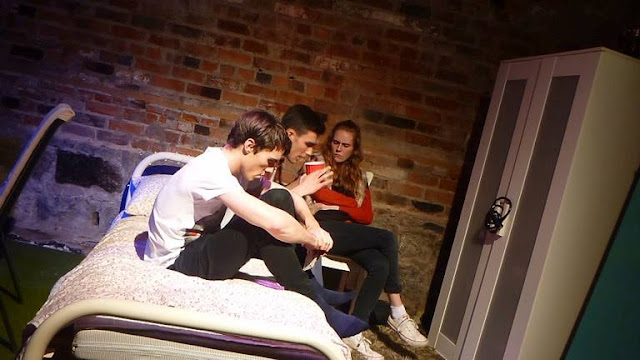 Flash is an intriguing new British play being presented at the Owl & Cat Theatre this month. Written by Francis Grin, Flash is a story about psychopathy, peer pressure, and abuse, and is a great tale for these cold winter nights. It's not a ghost story but it could very well leave you with nightmares.

Grin begins the story at the end, and as the clock winds back the events of the preceding evening are unfolded. Interspersed are time jumping vignettes of the protagonist (Christian) at home with his father. This idea of moving backwards through the story creates a much more chilling effect than a normal forward revealing approach would have done. If you have ever read a newspaper article about a horrific event and wondered how it happened you will, for once, have your curiosity satisfied but I don't think you will feel any better for knowing.

Weintraub plays the central character of Christian - a highly energetic and fun loving kind of guy - and Sutherland is his sidekick Oliver. They are just full of energy and the risk taking of youth, right? That is certainly what everyone chooses to believe. Who cares about the burnt cockroaches and the unpopular girl? It's all just youthful exuberance and they won't cause any serious harm... They're good kids.

Weintraub does most of the work in this production and it is his energy which carries the play. It is not that the acting from the others is bad, it is more that they are very passive and so rather than giving Weintraub challenges to respond to and react against, they tend to wait for him to effect them all the time. This works for Sutherland who has created a character of surly meanness but Duncan misses a lot of opportunities to push back and create tension.

I feel Bohan and Fairbairn have misinterpreted their characters and are trying to be too nice. Fairbairn has a wonderful brooding presence but the script refers to him as an alcoholic and there is nothing of that in his portrayal which, again, leaves Weintraub nothing to play against. This releases the tension of the show right when it should be getting tighter and tighter.

To be honest I wasn't entirely sure whether Fairbairn was just playing one character or a couple of them, and I don't know if that is a directorial or a script problem. It is a problem though. Whiteside has done a good job of working with the actors generally. They are very clear about where they are and why they are there which gives an exciting precision to their movements.

The difficulty is this production is just too nice. All of the characters are likeable and everybody is so controlled and ordinary the audience has to really work hard to get to the point and access the horror. Of course, playing the opposite is a good technique but this is a suspense thriller and it needs to have ugly moments, it needs to be explosive, it needs to frighten. A sickness in the belly grows as the story is revealed and this could be multiplied in impact with a bit more grit.

Mounsey's set is clever and I like the use of the space in the lengthwise configuration although it did become a bit like watching a tennis match. There is too much furniture. The stage is being used for breadth and this means there is little depth to play with so less furniture would give the actors room to build tension rather than trying to make their way around things. A closer look at what the central concern of the play is would have helped Whiteside and Mounsey make stronger choices which would prevent the audience from having any chance of disengaging.

I really like the ideas in this play and how the story is told. Weintraub and Sutherland are fantastic, and Flash evokes just enough coldness to help create a chilling night of theatre.