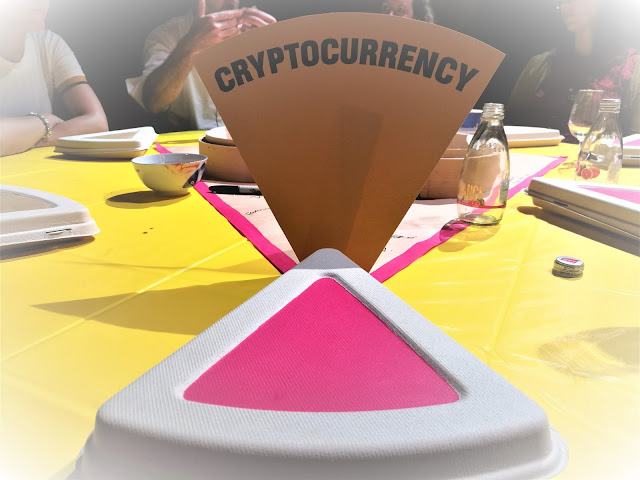 Arts House has been a big leader in the Melbourne Live Art scene but it is not just about participation and self reflection. Since the first iteration of the Festival of Live Art Arts House has been exploring ways to use art to change people, change communities, and change the world within an active arts paradigm. As part of this, they have regularly engaged in creating experiences which are actually a form of participatory action research and the most current version is their fabulous Supper Club series. I was given the opportunity to attend the Soft Money event and although I have no idea what I was expecting, I know and awful lot more than I did when I turned up - and had a plentiful supply of cuisine provided by The Oriental Tea House. Yum!

Participatory action research is a qualitative process which encourages action in the community using collaboration and following reflection. Don't panic! The Supper Club is not some sort of quasi post graduate education disguised as good food and good fun. It is far more real than that. Far more human. It also has the big difference of not having any reporting requirements or follow up.

Perhaps the best way to think about the Supper Club is along the lines of a formalised progressive salon. You get to meet exciting new people and discuss topics you never thought you would, but possibly hoped would happen. Travelling from table to table your dining companions change and all the conversations are facilitated by people who know their stuff, can answer questions, or can pose curly conundrums for us to consider and debate.

Supper Club: Soft Money revolved around the topics of the ways in which the concept of money as a universal means of exchange exist in our world and what this can mean in our future. There were tables to discuss banking, bartering, lottery, service, cryptocurrency and paying the rent.

It doesn't really matter which table you choose to sit at. You are given take away containers to stock up your food and are encouraged three times to switch tables. There isn't enough time to do all six, although you are encouraged to split up if you are with friends or partners so that you can exchange experiences later.

My journey began in 'Paying the Rent' which was a great focussing point. In this conversation we talked about our fiduciary responsibilities to Aboriginal and Torres Strait Islanders. There is a proposal which suggests all immigrant Australians pay an income tax of 1% to our First Nation as a form of rent. The idea is that we lease the land we live on (much like the Crown like's to lease what it considers it's land). This money would be managed by our landlords themselves and would go toward building a future of inspiration and accomplishment rather than just the mere survival they are living with now. I love it. Let's do it!

After this exciting and stimulating conversation I took a chance and moved to 'Cryptocurrency'. I keep hearing about bit coins and the crypto revolution so this seemed like a good time to find out more. In the end I am still in the dark. It's all about creating block chains and democratising the storage of data away from central databases such as banks, governments, hospitals... It sounded to me a bit like what the internet and social networking did for the news dissemination sector (although there is a mathematical validation in cryptocurrency). Don't ask me any more. I don't really get it and whilst our facilitator suggested it is the future, it may not be in my future. One big myth dispelled though, is that there is a finite source. Anyone can create a block chain (sort of) and thus new crypto currency is introduced.

I ended the night at the 'Lottery' table where a psychiatrist led us through a discussion about lotteries. We talked about why people buy lottery tickets and what they are hoping for or dreaming of. We discussed what we would do, and he gave us some data about whether it really does change people's lives. Apparently the $100,000 threshold is where the increased happiness sits. Anything more than that does not increase happiness and the happiness wears off after a few months anyway. So money does buy happiness, it just doesn't last. Also, he explained that people who play lotto for the big win are dreamers. People who play lotto for the small weekly wins are gamblers. An interesting distinction.

By then I had consumed a few glasses of bubbly from the bar (drinks not included) so whilst I did take a plus one, I wasn't able to grill him about the 'Bartering' table until the next day. Of course, this does mean the conversation continued and that is the magic of the Supper Club experiences.

The next one is on the 22nd March and is a topic close to our hearts - Hard Labour. We've all done gigs for 'exposure' or 'skills development' that did not include the payment of cash in return... Book now because I am pretty sure this next one will sell out quickly.