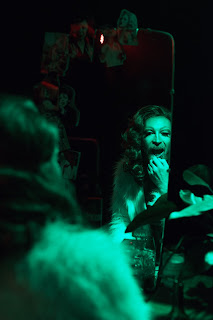 Party Snake is a monologue for a drag performer written by Kotryna Gesait who, in 2018, brought us This-That. Party Snake is enjoying it's 4th season, having done the fringe festival circuit (to rave reviews), and is now playing at The Burrow.

In this, it's premier set of runs, the character - no name is provided in the show or the program - is played by Martin. A drag queen transitions from her night persona to his day persona as a primary school teacher. Martin transposes himself from electrifying to vulnerable with mastery and authenticity. As a cis-woman I have never really thought about this, but when he says in his male persona he is the most vulnerable it really made me stop and think hard about what drag can mean in modern times.

In fact, it is this quality of forcing me to think which is what I like about Gesait's writing in general. In this monologue she references classical cultural references including Steinbeck's East of Eden, the Biblical fall of man, the Stonewall riots, and O'Brien's article on The Psychology of Drag.

Unfortunately I end up disagreeing with Gesait's analogies and allegories because, despite the cleverness and complexity of the connections, I don't feel she goes deep enough in her dramaturgy to really understand the links she is using and how they undermine the statements she is trying to make in her writing. Add to that the issue of a cis-woman trying to writing the story of a drag queen - a situation she can have no authentic experience of - and we end up with a play which is confused and full of over-confident pop psychology (and just a little over the line of insensitive at times).

The stroke of genius in Party Snake is making the central character a primary school drama teacher. This is not only historically homagic but also incredibly apt given Australia's current situation with new religious discrimination laws. Gesait asks the question whether a person's personal life does/should impact their professional life. Interestingly for me, I would suggest that the issue of the character being a drag queen at night has no impact on the teaching at all.

On the other hand, what could be a powerful statement is undermined by the fact that this particular drag queen is literally 'off her tits' on alcohol and drugs after a fun night out, and having returned home at 5:30 in the morning she needs to do a few lines of cocaine in order to face his day job, teaching primary school kids about theatre. (It is also possibly becasuse her attitude that teachers - all teachers  are failures at what they really want to do - is incredibly offensive and is another good reason why he should not be teaching anyone!)

It is the drugs and alcohol which make it inappropriate for this person to be a teacher, not the drag or homosexuality as is his inclination. I am aware that drugs and alcohol are a big problem in the LGBTQIA+ community and there is a wonderful and internationally popular Melbourne podcast called Love And Luck which speaks to this problem and sets out to create a community free of these demons.

There are two big themes running through most of Party Snake - that of choice and the other is of freedom. Looking something like the love child of Conchita Wurst and Rhonda Burchmore, Martin in drag demonstrates a confidence and brashness which (as mentioned earlier), he does not feel when interacting as a man. He talks about creating the drag persona as being an act of freedom and speaks of a time when he berates his mother for living a life of lies which - it is inferred - is because she does not recognise her gender fluidity.

This is where this review will get very controversial, but sometimes things need to be said. One of the false premises which seems often to underscore the LGBTQIA+ rhetoric is this idea that we are all somewhere on a spectrum but most of us are in denial. On the one hand, I see the point and a binary male/female viewpoint is unworkable and not evidenced in human society - ever! On the other hand, a significant portion of the population are on the very far edges of that spectrum, one side or the other.

I cannot speak for anyone else, but I am a cis-woman and I have never had even the slightest wish to be a man - trans or drag - and despite questions from people around me, I feel most definitely straight although I do believe who someone sleeps with is nobodies business. Thus, for me, I have no confusion and feel as free as a woman in our society is able to feel. Creating a male persona may open doors for me, but what do I do after I go through them because I certainly don't want to be wearing that skin for any length of time! Of course, woman have always had it a bit easier because wearing pants - a historically male signifier - is more socially acceptable. That is what drag is - using exaggerated opposite gender signifiers for a purpose.

This leads me to another set of fallacies in Gesait's script. She talks about safe spaces and how drag queens have never had a safe space. This comes in reference to The Psychology of Drag article where O'Brien posits 'these behaviors typically occur in “protected social worlds” as a way to gain status within that world.' I don't believe Gesait has read the article deeply enough for meaning or done enough research into the history of drag.

Gesait infers drag has always been a queer phenomenon and only goes back to the 50's and 60's when it was part of an underground culture which suffered great social stigma and rejection and involved many beatings and deaths by mainstream society. Gesait seems to have overlooked the word 'protected', and therefore has missed the point that the social world evolutionary psychologists are talking about is the drag community in this instance.

She also misses the history of drag which goes back deep into the recesses of time. It is a word synonymous with female impersonator and is actually a theatrical term. Shakespeare did it, Kabuki did it, and many other cultures engaged in dressing male actors as women. This leads me to another point the LGBTQIA+ culture often miss. Whilst wearing drag may be a modern symbol of freedom for them, it is an ancient symbol of female oppression for cis-women and it came about because women were not allowed to be stage actors - amongst so many other things! If you are a drag queen getting a negative reaction from a cis-woman you might want to think about that for a moment before ripping her to shreds.

The word drag entered the lexicon in the late 1800's with the rise of pantomime, and then came to the USA through vaudeville, and it was actually the province of straight men. It was the Prohibition Era in the USA which apparently melded drag (which came from female costumes dragging on the ground) with an underground culture and the queer community because speakeasies were a place for people to be free from laws and society and structure. The end of the Prohibition Era saw the end of the safe underground spaces and that is the era Gesait is referencing. That black hole between Prohibition and the emergence of Gay Pride in 1970.

The other big contradiction in Party Snake comes right at the end. There is an underlying tone and theme of loneliness which encompasses Martin's character, which culminates in him listening to Elvis Presley's 'Are You Lonesome Tonight' as the dawn comes. Straight afterwards, however, he goes on to say he has a partner, Adam, who loves him. He spends a moment talking about how tender and real that relationship is before the show closes. So was everything before a lie? Why was he out partying like it was the end of the world if this is true? I feel like this has been tacked on to avoid the tragic and doomed drag queen cliche, but it is moments like these which really make it obvious Gesait is not writing what she knows.

Party Snake is a story I want to hear and Martin performs it wonderfully and with authenticity. I just want to hear it from someone with lived experience. I am tired of the white privilege history of telling other people's stories. It made sense in the past when minorities where disenfranchised and needed others to tell their stories. Now, though, space is being made for those people to speak to us directly and that space does not need to be filled by advocates.