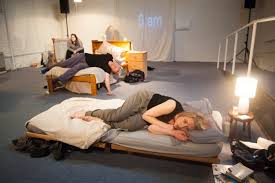 Normally, whenever I see that a show has been written and directed by the same person I can’t help a little groan from escaping because in my experience it is almost impossible for a writer to step outside the work far enough to make the show a full experience for the audience.  The Insomnia Project, currently showing at La Mama Courthouse, is the exception the to rule.  Moszenin not only wrote and directed it, but she is also the composer and it is her understanding of musical composition which brings the sophistication and detail into her directing that is often lacking.

The Insomnia Project is a study of sleeplessness – the phenomenon, the experiences, the distress and frustration, and the treatments.  Anyone who has ever experienced insomnia will find themselves inside this difficult condition almost immediately.  The true genius of the show is its ability to viscerally replicate the sensations in the audience – which is also what makes the show something of a living nightmare and a belly laugh for those who have been there themselves.

Natasha is one of our most skilled and accomplished composers with an extraordinary amount of experience in theatrical arenas as well as scoring films and musical composition.  She is classically trained, but has a rich history in contemporary music and theatrical composition.

The Insomnia Project loosely follows four people surviving an endless night of insomnia.  The funniest story line is played by Nicholls, who is spending the night at her parent’s house.  She can’t sleep, but also can’t do anything because everyone else in the house is asleep so she can’t make noise.

Snelling demonstrates an amazing understanding of her physical body in space as she replicates a zombie, and those scarey late night shadows, clinging to floors and walls in her torturous everlasting night. Scarlett has an amazing vocal texture, and her classically trained voice haunts the early hours of the morning with its hypnotic texture.

The show is a series of songs, but I wouldn’t call it a musical.  It is more music theatre than musical theatre.

Moszenin has a love of jazz, and that freestyle form litters the construction of the show in an intriguing and unpredictable manner.  Kelly manages to mimic this in her lighting design, teasing us with suggestions that things will happen but then revealing the truth cleverly.

The Insomnia Project is musically intriguing, and whilst the cast do suffer from some pitchiness which, I suspect, prevented Moszenin from giving the vocals the creativity that was possible, the big reveal of the night was Moszenin’s talent for directing. What she demonstrated was not just a flair for dramatic construction, but also an understanding of the body in the space, and sound in the space.

When you watch The Insomnia Project you are seeing a complete and unrelenting study which engages all of the senses.  It has humour, pathos, despair, and frustration – everything you want in a good night of theatre.

Apart from engaging this range of emotions, Moszenin engages all of our senses.  To do this she uses light, movement, zones, music, sounds, text…probably the only sense not engages is smell.

On a more serious note, this show is not just a study for the sake of it.  There is commentary as the various characters search for escape.

Some try alcohol, some try repetitive tasks, some try forcing themselves to sleep.  Eventually the topic of medically assisted sleep is touched on.

Moszenin goes through four popular products used to assist sleep including side effects and cautions.  Whilst this could get mired in tedium and repetition, Moszenin uses musical techniques of repetition, progression and call and response to lift it out of the banal and make the messages clear and also just a little bit of fun without being inappropriate or trivialising the issues.

The Insomnia Project is a truly unique work and one of the really outstanding shows this year.  Moszenin is a theatrical genius and I suspect we shall she her working on main stages in the very near future.