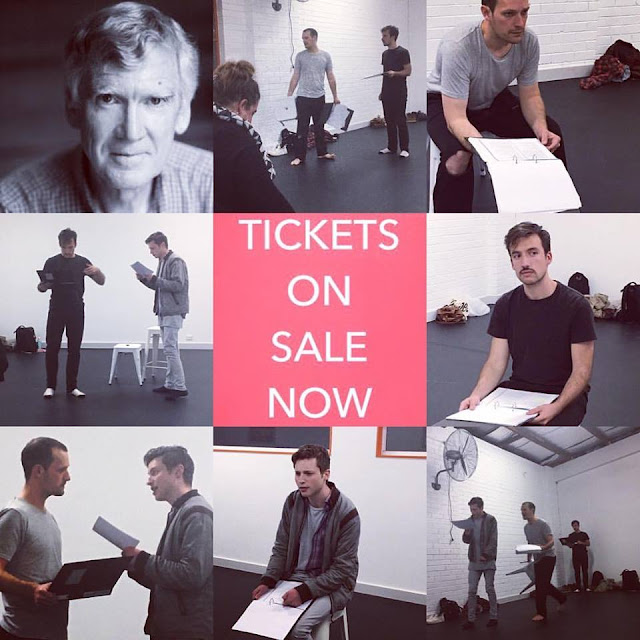 David Williamson's very early play The Removalists is the latest offering by inspiring young theatre group Baker's Dozen. This play (written in 1971) was one of the early works which formed part of a movement to bring an authentically Australian voice and lived experience to what had been an English dominated arena up to that point. The scary thing about Baker's Dozen staging this show is how relevant the themes and behaviors still are.

Watching this play I kept thinking about David Mamet which is really no surprise as both Davids were emerging in their cultures with a very similar aesthetic and intent at that point in time. Whilst Mamet's American Buffalo was written a few years later (1975) there are many ideas about power and violence which are strongly paralleled across both works.

On the surface, The Removalists is a play about power and control. It straddles the range of Australian society, exposing the universality of our interactions within the work force, within families, across social class, and across general interpersonal interactions. Everybody in the play is striving to be the person on top and is treading on the people around them to get there. You might consider this a bleak portrait of society...it is certainly a merciless one and, I think, a really accurate one as well - but I am a cynic.

Violence is the key to this struggle for power and in the second act it is revealed Kenny (Barnett) was a boxer. There is a lot of actual and implied violence in this play and boxing is a great analogy for the interactions between all of the characters as they try to manipulate and coerce and inculcate the people around them. Whilst I am a bit bored with the 'white box' school of design and it all seemed a bit pristine to me, I did like Mould's reference to the boxing ring floating in sea of blackness.

This also echoed the secondary commentary of the play which is about watching, watchfulness, and seeing. The story revolves around two policemen - Simmond (Lulham) and Ross (Silva). The police used to be called watchmen and their role is to watch over the community, see trouble, and keep the peace. Right from the first moments of the play Williamson makes sure we understand that seeing trouble is the last thing Simmonds wants to do and his intention is to make the new recruit as blind as he is. The arrival of Fiona (Monson) and Kate (Cox) force him to lift his eyelids if only for the briefest moment in time and that is when trouble enters.

Kerestes direction brings little enlightenment but there is a glimmer of insight in her use of a looping TV montage of civil unrest, misogyny, and community violence playing on the TV for the first half of the play. Williamson wrote The Removalists in a time of social awakening and the protest era. An important part of his commentary in this work is the active engagement of blindness to avoid seeing anything which might interfere with the status quo and make us question our lifestyles. My only problem with what Kerestes has done is that the images play throughout the first act and it is completely distracting and does not add to the story at this particular point in the show. It works beautifully as pre-performance framing and in the second act though.

The acting is quite good. Lulham is always reliable, but for me it was Barnett who lifted the whole show into a dynamic and engaging realm. Overall, I think a bit more script and character analysis would have helped everyone. There are a lot of script cues regarding characterisation which seem to have been missed or ignored. For example Kate is supposed to be a seductive nymphomaniac but is played like a cold fish. A film of The Removalists was made in 1975 and I can't help feeling that the cast have taken a lot of their interpretation cues from it which is disappointing because there is so much more in this play and it means the ugly humour is missed. In fact, I wanted everything to be a whole lot uglier - especially Simmonds!

The sound and lighting are great and support the work well and I like the bravery of the ensemble in not shying away from the violence. The lasts moments of the play embody everything that has happened so far in a spectacular explosion and release. Despite only having four sessions with the cast Stage Combat Consultant Joey Lai demonstrates an understanding of this play which the rest of the company need to pay attention to.

Williamson has kind of gone out of flavour recently but this production of The Removalists reminds us why he has become one of our most iconic Australian playwrights. The play is masterfully constructed and Kerestes has produced a good, solid staging. I encourage everybody to see it because it is important and it is good!