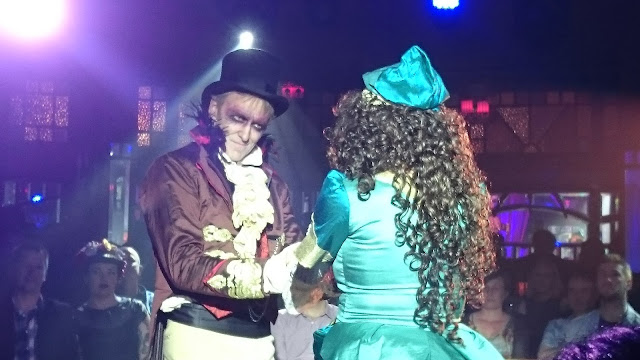 The Carnival of Lost Souls is a new production on the Spiegeltent circuit and has all of the style and panache we have come to expect from these offerings. It is not circus, it is not a magic show, it is not a concert. It is all of these and more. It is Carnival!

As the deathly pale figures emerge into the space in their 19th century garb, the ghostly apparitions made me think of All Hallow's Eve just gone. These lost souls, caught between being and not being are called to gather in this place by the ring master and search for that which they are grieving by reenacting their melancholy over and over again - trapped forever in a non-reality of play and despair.

The Carnival of Lost Souls is Noir from beginning to end. The pace is ponderous, yet spookily light as we watch the clown try to win his love again and again and again - never to succeed, never to be released. Highly choreographed tableaux frame these souls like photographs in an album before releasing them momentarily so they can continue in their quest for salvation, only to recapture them in an unforgiving frame.

The highlight for me was the finale which has all the shock and awe you could ever expect to experience in group acrobatics. I have never seen a human skipping rope before and I am not sure my heart could take it if I ever did again!

The aerialist, Trott, was also absolutely amazing. Her beauty and grace on the hoop was breathtaking and who doesn't enjoy a great silks routine? This Side Up do a fantastic hand balancing routine, showing wonderful strength and unison work. Their chair routine was fun and fabulous as well.

Circus Trick Tease bring the carnivalesque to The Carnival of Lost Souls with feats of levitation and legerdemain which we don't often see anymore. Whilst the prestidigitaton is still a bit rusty in parts, it is great fun and if you are addicted to LOL cats you will go crazy with 'awwww shucks' at one point.

My only hesitation with this show is I felt there were too many songs (although Maunder and Craig are magnificent singers), and they all started to sound the same after a while with no differentiation in pace or mood. The choreography during the songs became tedious and interfered with the action of the show as well. It was great to set the mood, and the odd reprise was good, but the first half of the show was really drawn out. Two less songs at the beginning would be great and some carnival during the songs would be better than the choreography. This could be a great opportunity for some smaller balance work or magic to occur. Craig and Kurth really need to engage more with the Carnival as well I feel, although Maunder was a last minute replacement due to illness which may have something to do with this problem. I also don't think it was choreographed for an in-the-round venue...

I am probably being too picky though. The whole night was a wonderful traverse through the netherworld of the unascended. The costumes were magnificent and Bovaird's lighting gave the whole show that wonderful shadowy underrealm feel needed to set the mood and give the Carnival texture.

The Carnival of Lost Souls is a wonderful and unique Spiegeltent experience. Prepare to laugh and enjoy the gloomiest night of your life!

What: Puppetry Of The Penis When: 2 - 9 April 2017 Where: The Palms at Crown Created by: Simon Morley and David Friend Performed by: Rich Binning and Barry Brisco Rich Binning, The Hamburger, and Barry Brisco If you haven't heard of the hit comedy show Puppetry of the Penis by now you haven't been living on planet Earth. Created for the Melbourne International Comedy Festival back in 1998, this show has grown exponentially over the years and is now a permanent Vegas show. For one week only Binning and Brisco perform it for us at The Palms at Crown . I confess that I am one of the few people in the world who had not seen the show yet, so I was...excited(?)...to get the opportunity to experience this unique form of puppetry which could only be invented by the Australian ocker. It was a bit strange to hear the American accents of this new generation of puppeteers but given the scope and scale of the Penis machine it is not surprising. Brisco tells us "There ar
Read more