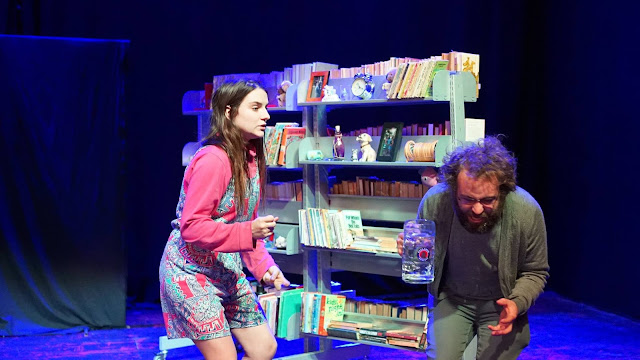 Waiting for Waiting for Godot is a new play written by Lah and being performed as part of this year's Melbourne Fringe Festival. It is being presented at Kindred Studios in Footscray, which is a wonderful choice because of the unusual height of that stage which had the possibility to echo the scope and scale of libraries across time, and the existential properties of the mind.

Of course, none of this matters because Waiting for Waiting for Godot has absolutely nothing to do with Beckett, or existentialism, or... well anything of significance really. It is a play about a man trying find a copy of the Beckett and supposedly being thwarted at every turn.

Except that is not true. In the third scene his friend calls to say she has the book and he can come over to  pick it up. Of course, if that had happened there would be no play. It should have happened.

Lah apparently wrote this play after a few days of frustration trying to get a copy of the Beckett from a library. The publicity says 'don't worry if you haven't read it, neither has the playwright'. It shows.

Apart from the inherent misrepresentation of using Waiting for Godot in the title, perhaps if Lah was better at researching he would have realised a play by this name already exists. In 2013 Dave Hanson's Waiting for Waiting for Godot appeared in the New York Fringe and at the same time as Lah's play was being staged, a production of the Hanson play was being performed in England. I wish I had gone to England.

Waiting for Waiting for Godot is apparently Lah's first full length play, but I think he might be a bit confused about what a full length play actually is. The show barely lasts forty very long minutes, but it also seems to just stop - mainly because there is just not enough content.

Savrone has fleshed the ending out with a nightmarish dance scene with a blow up doll - an homage to a psychotic episode to give the play some lift and depth, but at the end I literally had to ask another audience member if it was over. I was glad the answer was yes. In Savrone's defense, she did take over the project after Lah's original director pulled out.

This play has no content, poor character detail, and really appalling dialogue. The actors do their best to create some sort of dynamic but only Jayne seems to have the experience to work with such poor material, and everyone is hampered by Lah's inability to act. Perhaps if he had the foresight to stay off the stage he would have seen the problems with the script during rehearsal...

Savrone has worked hard to give this show life, but this whole venture is a dead man walking. Savrone does try to develop archetypes and physicality with the actors which helped keep me awake but I did question the decision to not use Jayne in the final psychosis scene when Lah dances with the dummy. It would have provided some humour and suggest some kind of cognitive thought if she was able to react within this nightmare.

I was also disappointed Savrone used the book shelves to close off that magnificent stage when it was so evocative of a great chasm - psychic or real. I suspect working in the smaller space of The Owl and Cat has developed her instincts to create intimate theatre which means she missed the opportunity to open this play up. A large space can be daunting.

I really have nothing good to say about Lah's work on either the page or the stage. Jayne has skills and Savrone almost manages to save the show to at least a vestige of watchability, but in the end trimming your mum's toenails would be more exciting than seeing this show.