Never (in the history of calm down has anyone calmed down by being told to) Calm Down! - Cabaret Review

- November 08, 2019
What: Never (in the history of calm down has anyone calmed down by being told to) Calm Down!
When: 7 - 10 November 2019
Where: Melba Spiegeltent
Created and performed by: Rebecca Church, Maude Davey, and Anna Lumb 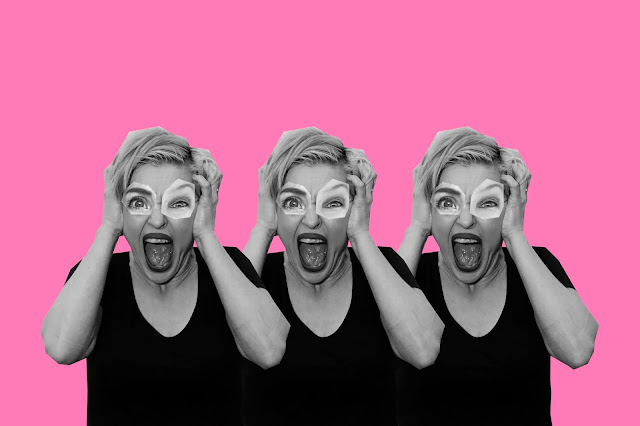 Circus Oz is presenting it's two week experimental circus festival, Sidesault, over the next fortnight and one of the powerhouse shows kicking off this first week is a show with the longest (but most brilliant) title which I - along with others - will shorten to Never...Calm Down! Experimental circus is a bit like live art - nobody really knows what it is. Yet that is what is so exciting about it and this show really does push the boundaries...or does it?

Never...Calm Down! is the brain child of three of Melbourne's cabaret doyenne's Lumb, Davey, and Church (who you may better recognise as burlesque artist Becky Lou). The reason I say this show is experimental circus is because the circus elements - aerial work, contortion, acrobatics - are so seemlessly woven into the narrative and shape of the show you could easily come away saying it isn't circus at all.  The reason I say it is not pushing boundaries is that these women have been pushing these boundaries throughout their entire artistic career.

Never...Calm Down! is a dreamscape. Or more accurately, it is a nightmare. It is the nightmare we women live our whole lives long. Beginning with a vignette which is something of the lovechild between Marilyn Monroe Hollywood glamour and the 'Beauty School Dropout' sequence from Grease you know instantly what this evening is going to be about.

Davey loves working with surrealism and with her and Lumb starting wearing lightshades over their heads, acting as living furniture to the lazily lounging Church, the hallmark beautiful irreverance which is about to ensue is hinted at before the show even begins. As predicted, Never...Calm Down! becomes a crying, shrieking, hilarious, and painful ode to the plight of the female psyche in the modern world.

This work was always going to be feminist in nature - this is what these women do. I think, though, the trauma of the actions of those St Kevin's College boys crystalised the nexus of the work and Never...Calm Down! riffs on that horrible song and why even the strongest women, at their core, are taught to feel like shit. Literally poo as Davey shows us in a hilariously painful manner.

Amongst the plethora of Monroe wigs and sequined gowns, mixed in with the contortion hoop and aerial pulley, is a fierce splattering of blood, guts and tears. Do you want to know how strong women are?

This is what Never...Calm Down! is about. It is about what a woman's life looks like when you stare at it in the face without the veneer of patriarchy trying to gloss it over and cover it up. It is the living nightmare men don't want to face. It is the hysterical woman who has something to complain about without the chemistry of valium to smooth it out.

Did you watch Q&A last week? The one with all the women? The episode has been pulled down from all platforms because women speaking the truth is one of the most dangerous things in the world.

This is the conversation Never...Calm Down! is engaging in. Do we have to have the civil war the suffragette's never got to finish before you will acknowledge women as equal? I hope not.

Don't worry though, Never...Calm Down! won't be pulled down like the TV show was, but it is a very short season so make sure you get down to the Melba Spiegeltent this weekend before it is gone.