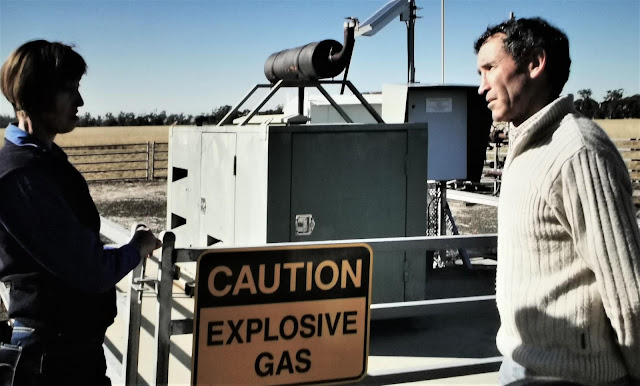 In Australia we live on the driest inhabited continent in the world. The human body cannot survive more than a week without water. We know this. This is science. Despite this our Government keeps turning a blind eye to the great risks resource mining is putting on our miniscule water resources and endangering our existence. The film Pipe Dreams Fractured Lives looks at the most looming existential threat to Australians - fracking. The Lift-Off Film Festival brought it to Melbourne audiences last night.

Fracking is a term we hear a lot, but I suspect few of us really understanding. It is the process of injecting liquid at very high pressure into underground rock layers in order to open up pre-existing cracks and fissures and create holes or tunnels. This process releases the gas which has been stored in the rocks, enabling extraction for human use. Personally, this is all I need to hear to make me want to say "No way! You want to make the solid ground I stand on turn into swiss cheese which puts everything at risk of collapsing into sink holes?" Still, that might be considered over reaction so let's calm down and investigate the story further.

The type of fracking we have heard most about in Australia is coal seam gas extraction, which is the type of industry which has swamped the agricultural lands around Chinchilla in Queensland. This kind of fracking breaks open the seams in the layers of coal and produces immense amounts of methane. Methane. That gas animals fart and which climate activists say is one of the reasons we need to eat more vegetables so that we don't kill the planet through global warming...

The industry which has spurred this movie into production is the process of shale fracking which was an issue of great controversy in South Australia in recent years. Shale fracking is different than coal seam fracking because you have to go deeper into the earth and therefore powerful hydraulics must be used. As the film shows us through interviews and site inspections in Pennsylvania, these hydraulics are noisy, require maintenance and have been known to fail. Ignoring the standard methane leakage (which is, in practice, well above proposed specifications in Australia), there have been pipeline failures and, in fact, it has been shown that ALL pipelines will fail within 100 years of installation. So there we have guaranteed failure within the span of one human life time. Not scared yet?

In the south-east of South Australia lies the geological marvel of the limestone plains which encompass the areas around Mount Gambier. South Australia is the driest state on the driest continent, but in Mount Gambier there is The Blue Lake - the only water source for that part of our country. Limestone is a kind of rock which is made up of the fossils of sea creatures which build shells, and the district is covered with caves and a whole lot of already naturally occurring sink holes. (I need to point out my Mum lives there, so I do know a bit about the area myself). Shale fracking was proposed on the limestone coast.

Pipe Dreams Fractured Lives is a film created by farmer David Smith, who had serious concerns about the consequences. He set off to understand other communities experiences and make sure everybody who supported this process understood the risks and destruction which might ensue, and to learn how to identify the marketing spin and outright lies from fact and fortune.

Pipe Dreams Fractured Lives is not the kind of documentary which spouts facts and figures. It is an experiential investigation which focusses on speaking to people and looking at the cost/benefit outcomes for them. In this case (as should be in all cases) cost/benefit doesn't just mean economic profit and loss - it also means personal loss and community disruption...and, in the saddest of cases, loss of life.

Travelling between Queensland and the USA, Smith talks to locals, farmers, and academics to try and look at the full picture. The film does start with the mechanics of fracking, but it doesn't get bogged down there and in talking with real people we start to see the bigger picture.

This is a tricky technology because it is new and research papers have only really started to be available for study since around 2009 and most of those early ones were by the mining companies themselves who are trying to develop the technologies so they hold an inherent bias. This also means many of the reports of water contamination still fall into the same grey categories of issues such as cancer clusters and chemical plant leakages - poor health incidents are way above coincidence, but can you prove it in a court of law?

What we do know, though, is people in Pennsylvania have enlarged and exploding spleens, people are losing access control and enjoyment of their land because of the noise and traffic associated with building and maintaining the wells, and irregular extraction schedules. People are only seeing royalties of any great degree for around 3 years before the money falls off to negligible amounts. Most fracking wells are only viable for around 30 years. Methane does leak at higher levels than the companies propose. Wells do fail which leads to potentially catastrophic consequences. Communities disintegrate because their quiet agricultural idylls turn into noisy, industrial hubs. New born livestock are dying at far higher rates than previously. The reproductive cycles of humans and animals are being interrupted. People are killing themselves in desperation and frustration to have their objections and concerns heard by Powers That Be. Only a handful of the fracking sites installed produce profitable amounts for the land owners. All of this is revealed in Pipe Dreams Fractured Lives.

So how do we get back to the question of water? Water is one of the most absorbent substances we know. Have you ever left water in the fridge for a week without a lid? Have you noticed how it becomes smelly, kind of dense and possibly discoloured? So what do you think happens to our incredibly limited ground water, aquefers, and the Great Artesian Basin if we go around creating massive fissures in our continent's substrata and releasing gasses? Is a mining companies profit margin worth the risk to our country? Our planet? Are a few jobs or the money to build a house worth the extinction of our lives? And is it worth risking all this damage for something which only has an economic lifespan of 30 years?

Just before this film was released (and undoubtedly partially as a result of what was revealed through its making) South Australia did impose a 10 year moratorium on fracking, and WA has now protected 98% of itself from the process. However, in South Australia the moratorium is up in 2028 and the conversation needs to start again. In Victoria fracking is banned completely, but as Finucane & Smith told us in The Rapture: Chapter II, 85% of the Northern Territory is under, or in negotiation for, a fracking license.

I am pro-technology and progress, but there is nothing in my 'waters' which tells me this is a good thing. Apart from the whole bigger climate change catastrophe we are creating, lets just get local for a moment and ask ourselves can we really afford to turn our island into a giant sinkhole and risk what little water we have to contamination? Don't we already have enough water problems with the Murray/Darling disaster? Is mining money really more important than our ability to drink and eat?

I can't answer these questions for you. Neither can Pipe Dreams Fractured Lives. You do need to watch it though because when you consider your position and the fate of our land and our people these are the things which need to be mulled over. Hear from people who are in the middle of it. We all hear what the mining companies want us to know. Listen to the stories they don't want us to find out about and then make up your mind. This could be the biggest post-truth age decision you ever need to make.