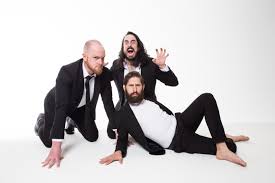 Aunty Donna is a comedy trio (they used to be a foursome) who have developed a devoted YouTube following, and are bringing us their comedy stylings live at the Australian Centre For Moving Images (ACMI) this year.  These guys are funny and professional, and bring a performance that is rehearsed, well paced, and structured with a sophistication we rarely see in sketch comedy.

Given that they have such a strong YouTube presence, and having read some reviews from their Adelaide season last month, I was surprised that they had no video content in the show.  It has become such a standard in the world of comedy - especially sketch comedy - and with the show being at ACMI, and given their platform, I had a moment of cognitive dissonance as I sat down.  I have to say, though, that these guys don’t need that particular gimmick or prop.  They do everything live that they do on the internet, and I think they do it better!

The show takes a long time to start, but when it does, the pace is amazing and the energy just blows the roof off.  The overlying conceit of the work is about a competing trio called the Bubblebath Boys who are trying to hunt down and kill Aunty Donna so they can take over as comedy kings.  The audience is encouraged to clap and click and stomp along with them which had us all interacting right from the beginning.

The Bubblebath boys disappear (for now) and Aunty Donna come on stage with an opening song and dance number about everyone being welcome.  The music is club music and the sound system is pumping so the adrenaline is lifted right from the start.  The guys put every ounce of energy into their moves and the choreography is synchronised perfectly which is important for the comic timing.

The Aunty Donna guys each have distinctive personas which work as foils to each other.  Ruane is the naïve psychotic, Bonanno is the screaming wannabe nudist, and Kelly is the straight man.

This show was a little more age friendly than their YouTube material, with less swearing and a few less cock jokes than usual.  This tells me they understand their audiences as well as they understand their material.  The show has a slightly broader appeal and based on the audience and their reactions on the night I went, they do not disappoint their loyal fans with this slightly muted show either.

The sketches include a parody of Family Feud and Little Red Riding Hood.  Apart from sketches though, their humour includes wordplay, observation, and mime.  The observational humour was possibly some of the funniest, including ‘the man who didn’t know there was a line’ and ‘the man who shat in his pants and didn’t want anyone to know’.

As the show continued I was especially impressed with how the sketches and puns and ideas were interwoven.  A lot of sketch comedy is linear, with one sketch moving to the next and to the next.  Aunty Donna have created a complex web where things cross over and ideas jump around, and yet it is never confusing.  What it does do is keep the pace tight.  These guys were working hard which was evidenced by the sweat pouring down their faces.

The pace does flag in the middle when Bonanno plays a ‘culturally inappropriate’ impersonation of an old, Italian man.  The sketch goes on too long, and generally speaking, I found Bonanno’s constant screaming a bit annoying towards the end.  That is just personal taste though.

A genius moment in the show was the 40 second interval.  Knowing that this didn’t give the audience any time to leave, they ran around providing us all with water, fresh air, and toilet facilities in our seats.  I felt a bit sorry for the people who accepted the offers before they knew what was coming whilst at the same time I was laughing my head off.

I can’t tell you how the battle between the Bubblebath Boys and Aunty Donna ends, but there is a wonderful battle scene which kept me on the edge of my seat!  Aunty Donna is just really great fun.  It is high in energy and full of laughs.  Put it on your list.  These guys are here to stay.

What: Puppetry Of The Penis When: 2 - 9 April 2017 Where: The Palms at Crown Created by: Simon Morley and David Friend Performed by: Rich Binning and Barry Brisco Rich Binning, The Hamburger, and Barry Brisco If you haven't heard of the hit comedy show Puppetry of the Penis by now you haven't been living on planet Earth. Created for the Melbourne International Comedy Festival back in 1998, this show has grown exponentially over the years and is now a permanent Vegas show. For one week only Binning and Brisco perform it for us at The Palms at Crown . I confess that I am one of the few people in the world who had not seen the show yet, so I was...excited(?)...to get the opportunity to experience this unique form of puppetry which could only be invented by the Australian ocker. It was a bit strange to hear the American accents of this new generation of puppeteers but given the scope and scale of the Penis machine it is not surprising. Brisco tells us "There ar
Read more