Fiddler On The Roof - Musical Review 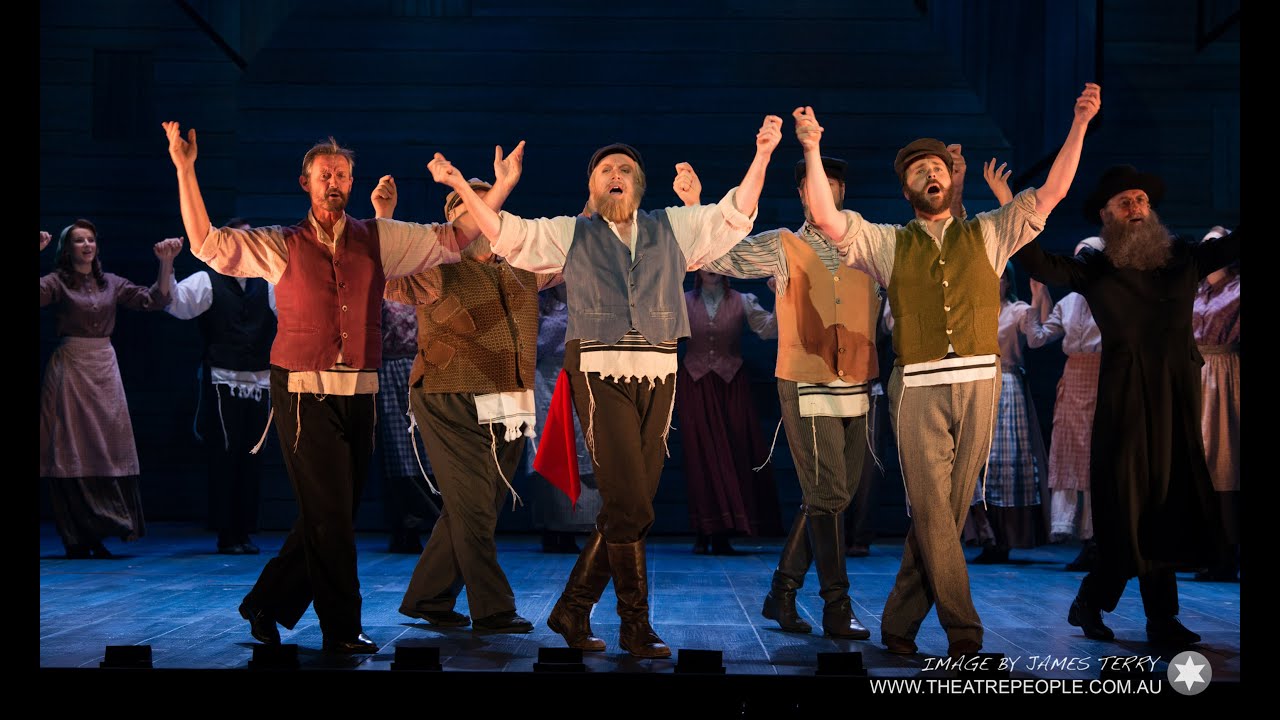 Fiddler on the Roof is one of the great classic musical theatre shows and is playing now at the Princess Theatre until the end of February.  With a time tested story, music that won’t leave your brain for days, and a star the magnitude of Anthony Warlow it can’t go wrong and it doesn’t.

Fiddler on the Roof is (in précis) the story of a poor Jewish milkman who lives in a small town in Russia (Anatevka). He has 5 daughters, 3 of which are at marrying age.

Whilst it is not clear if the Jews of Anatevka are Hasidic, they are definitely orthodox. In that regard their entire societal structure functions through a series of rules and practices which are clearly laid out and not open to debate.  These practices are part of tradition.  As Tevye points out right at the beginning, nobody really remembers why they exist or where they come from, but they follow them anyway because they always have and it helps keep change at bay.

Fiddler on the Roof, when it was first performed, was criticised for being culturally sanitized and this current production directed by Hodgman certainly lives up to that. There are so many deep and painful themes in the musical, but as is Hodgman’s style, they are swept aside and hurried past so that the audience can move on to happy or funny stuff. It is a shame because this musical allows for both.

Perhaps I expected more depth because the casting has such depth of acting talent, and in interviews Hodgman admitted that he was looking to give original production a focus on the characters and their story. Perhaps another subliminal mistake was made by the cast. In an interview with Thornton she said that everyone was aware that this was Warlow’s show and their job was to support him.  A noble idea, but to be honest the show could have done with a bit of competitive scene stealing.

The show starts with a heart pounding and exhilarating rendition of ‘Tradition’, and had the audience clapping along right from the get go. The characters are introduced perfectly so that we know who everybody is, and vocally this is one of the finest ensembles around.  Dickerson’s conducting is also superb and musically everything about the show is flawless. You will sway with ‘Sunrise, Sunset’ and swoon to ‘Matchmaker’, and tears will flow and breaths will be held in ‘Do You Love Me?’.

Warlow (Tevye) is everything you might expect and so much more. Is there anything this man can’t do?  His singing is heavenly, yet so full of character and intention. Warlow has mastered the art of the throwaway line which has not been thrown away, and the truth, energy and depth of his character interpretation is a joy to watch – positively mesmerizing!

In an interview Warlow expressed concern about performing this role, but eventually came around to the idea by approaching it from the angle of a Polish Jew. I have read a couple of reviews which implied that he has interpreted Topol’s Tevye, but Warlow is very clear about steering clear of that, and I think he has succeeded.  He is playing a father who is dealing with progress and his performance is honest and intimate.

One of the biggest problems with the show is the casting of Thornton as Golda. She is a marvellous actress, but does not have a singing voice that can in any way match Warlow which is a problem because they do a duet. She has tried to cover this by trying to speak/sing as a character but it doesn’t work, and is still isn’t strong enough against Warlow (even with him toning down his own abilities).

Mitchell is wasted a bit as Lazar Wolf. Part of the problem is the script, but the direction gives him no opportunity to play to his strengths. The reality is that it could have been any actor under that hat and beard. It is a shame.

Wendt was really the only true match for Warlow. Playing the Matchmaker, she delivered her acerbic lines with energy and just the right amount of wit. She is perhaps the only one, other than Warlow, who did not get lost in the crowd.

Robert’s set has been designed for touring. It forms a box set (a concept that I thought had died decades ago but which seems to be compulsory for musicals these days). It is cleverly designed something like a jigsaw puzzle, with the pieces cut to the shape of houses, some of which are pulled out on stage to reveal locations such as Tevye’s house, the bar, and Motel’s workshop, only to be pushed back into place when the scene is finished.

At first I was disappointed, thinking Roberts had just fallen for the standard blue/orange aesthetic dominating film at the moment. Thinking about it a bit deeper I realised that Roberts was a much greater designer than that. What he has done is referenced the colour palette of Marc Chagall. Chagall was a painter whose work influenced the title of the play and also the original set design.

I suspect the possibilities inherent in the use of the set go far beyond the scope of Hodgman’s direction, but despite the lack of directorial exploration Jackson has done a wonderful job of lighting what is quite a flat and barren landscape. He has found ways to make the Chagall blue of the set come alive with nuances of grey and greenish tinges which are subtle yet effective.  My only hesitation is the nightmare scene. It doesn’t work for me and felt jarringly out of place.

Water’s sound design is perfection, which nicely matches the talents of Dickerson. Trained ears will be able to hear the strengths and weaknesses of various voices, but Waters has balanced them immaculately so that the rooms swells regardless. Music and dialogue sit comfortably side by side and nothing is lost or distorted. It is a joy to listen to this production on every level.

This original Australian production of Fiddler on the Roof will have you leaving the theatre smiling and humming the tunes.  I am not sure that is entirely right given that the story ends on an exodus, but it’s okay.

The story is an important one given the struggles in Australia at the moment with immigrant communities trying to find their place in our Western dominated culture. Whilst the characters are Jewish, this story speaks to all cultures where tradition is challenged by progress. Fiddler on the Roof doesn’t provide answers, but it makes us feel less alone in the struggle.