Everyman and The Poledancers - Theatre Review 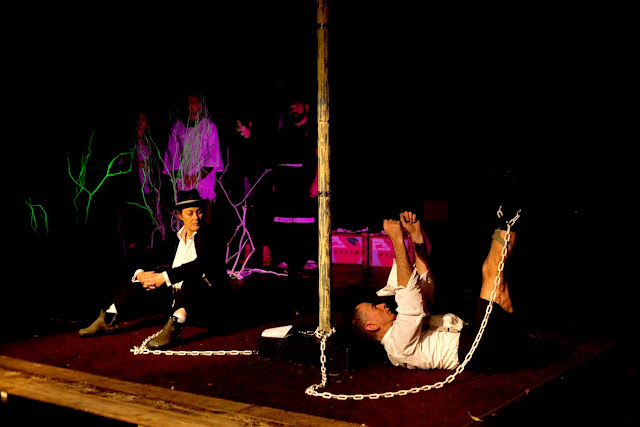 Everyman and the Pole Dancers is a new, intercultural work created by Australian theatre company Auto Da Fe in association with the Japanese Shinjuku Ryozanpaku theatre company.  The show is being presented at the Brunswick Mechanics Institute as part of the 2014 Melbourne Fringe Festival.

This production has Japanese artists Tadano, Denda, and Shimamoto performing in English.  When it closes here, it will tour to Japan and be partially recast and performed in Japanese, with Crosby and Doyle staying with the show.

This play is the brainchild of Mackiewicz and he has invited artists of great talent and experience to travel down this absurdist journey into the Apocalypse.  Although the dominating aesthetic of the work is Japanese, the introduction of Davey and Bayley in particular, and with the title reference tool being the European ‘Everyman’, the work explodes into a stratosphere of glorious chaos and dissolution at a moment’s notice with the tensions between forms as well as content.

The Summoning of Everyman is a late 15th century English morality play.  Everyman is summoned by Death to tally his deeds of good and ill before God for judgement.  He tries to delay, and tries to get people to accompany him to improve his ‘ledger’, but in the end realises he is alone.

The more generic character ‘Everyman’ has gone on to be theatrical tool.  The ‘Everyman’ is a person of no particular skill and is thus relatable by all.  In modern works the Everyman also takes on the functions of narrator or provocateur as desired.

Everyman and the Pole Dancers follows the form of the original play very closely.  Everyman (Davey) comes out as narrator and tells us that the end is nigh and that the family we see before us at the dinner table will reconstruct “the murder of our life as we knew it”. The Gods are demanding an accounting before they destroy us all to begin anew.

A grandmother (Bayley) and a grandfather (Crosby) are attached with chains to a pole centre stage and declare in great defiance that they will not go into the retirement village, even though it will benefit their grandchildren financially.  They don’t want to be stuck with a whole lot of old people...

We are then introduced to the mother (Doyle) who has decided she is a gay may, the father (Shimamoto) who wants to swing, the son (Vella) who wants the grandparents to go to the retirement home so he can live off their pensions, and the daughter (Denda) the free spirit.

The overarching story is the desperate attempts to get the grandparents into the retirement village and their refusal to comply, plotting to defeat the system.  They are all tossed in time though, and constantly refer to the fact that this could be happening now or a hundred years ago or last week.  It becomes clear that they are all each other and other people at different points in their time lines, even though they are constrained to exist amongst themselves in this defined peer relationship.

Davey plays with them all throughout the play.  She appears as policeman, judge, psychiatrist, referee, sex worker, and confident – constantly jumping in and out of the action to interrupt, instruct, or otherwise interfere with the realities regularly being constructed.  The tension in the work is these influences all acting upon each other, supporting each element tenderly, yet pulling them to breaking point at all times.

Such fracturing of realities within the delicate and precise frame created by Ota at times leaves you breathless, just waiting for the whole thing to fall apart and collapse into unintelligibility.  Of course, there is too much talent and experience in this ensemble for any such thing to occur.

Everyman and the Pole Dancers is a very, very funny play, yet in the tradition of all great absurdist theatre, there are deep and dark rumblings underneath.

The play ends with the daughter telling the story of a man who killed daily because he was instructed to do so in his ‘Book of Everything’.  One day his superiors deserted him and then he had to face the consequences of his actions and was sentenced to death.  The Wheel of Fortune at work.

The entire ensemble was chosen for their expertise, and the scope and style of the show allows all of them to inhabit their characters within their genre without destabilising the piece.  Davey brings her burlesque talents, Denda has the energy and spirit of Engeki, Vella brings traces of Commedia, and Crosby and Doyle work from the Suzuki method.  The interweaving of these styles perfectly matches the absurdity of content and structure.

Accompanying the entire play, Tadano sits upstage playing the Shamisen with skill and spirit and incredible precision, keeping the whole work alive and rushing at a rollicking pace towards it’s inevitable conclusion.

This play is a work of scope and scale and originality we rarely see on any stage other than the Malthouse and it is wonderful to see it being done here.  Everyman and the Pole Dancers has been published by Currency Press and is available for purchase at the box office for a discounted price.